The official American Kennel Club breed standard probably contains many unfamiliar terms. Here’s a dictionary of the most common ones illustrated with a graphic of a generic dog.

Angulation – Angles formed by joints of the skeleton

Hock – Joint in the hind leg (an ankle in humans)

Leather ear – Caused by fungus. Dogs have black shading and no hair on the ear or bridge of the nose.

Muzzle – Part of the face in front of the eyes including mouth, nose and jaws

Topline – Outline of the dog between the withers and the tail; i.e., the back

Undershot bite – An underbite, opposite of overshot bite

Withers – Point at the top of the dog’s shoulders where the neck and back meet, from which a dog’s height is calculated 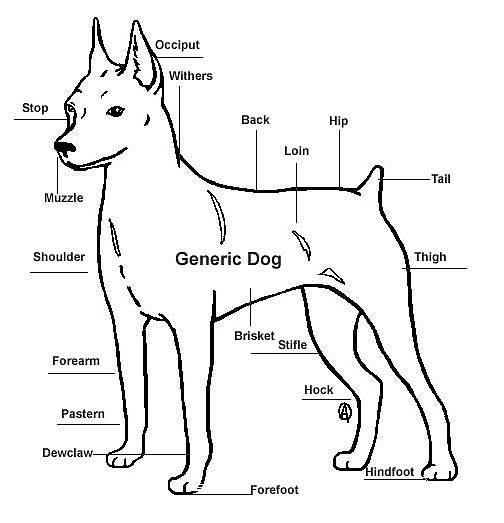